The Worst Trip Ever Pt 1 - Raiders of the Lost Park


This past April-May, I spent 20 days in Ethiopia on a photography tour that was unequivocally, indubitably and incontrovertibly the worst I have ever been on in 5 years of such activities.

Highlights from the first 10 days of the trip (the so-called 'Northern Route'), are chronicled in my posts about the night hike up active volcanic crater Mt Erta'ale (itself an unmitigated disaster) and a day in the hottest inhabited place on Earth. Sweeping first place in the hall of shame though, are the latter ten days of the trip (the 'Southern Route'). While the night hike was akin to a blitzkrieg, the Southern Route was an interminable siege of the body and mind.

It was like a twilight zone of endless suffering, in which I spent all my time and energy crawling up the cliff-like lowest two tiers of Maslow's pyramid. No wonder the higher order functions like self-expression thru photography never quite hit their stride.


PART 1 - RAIDERS OF THE LOST PARK


Below is a map of the original itinerary we were given (in yellow with dots) vs. the actual route travelled (in green). Ethiopia, by the way, is about twice the size of Thailand or, if you like, Texasss (yeehaw), just so these little lines can be put in perspective. 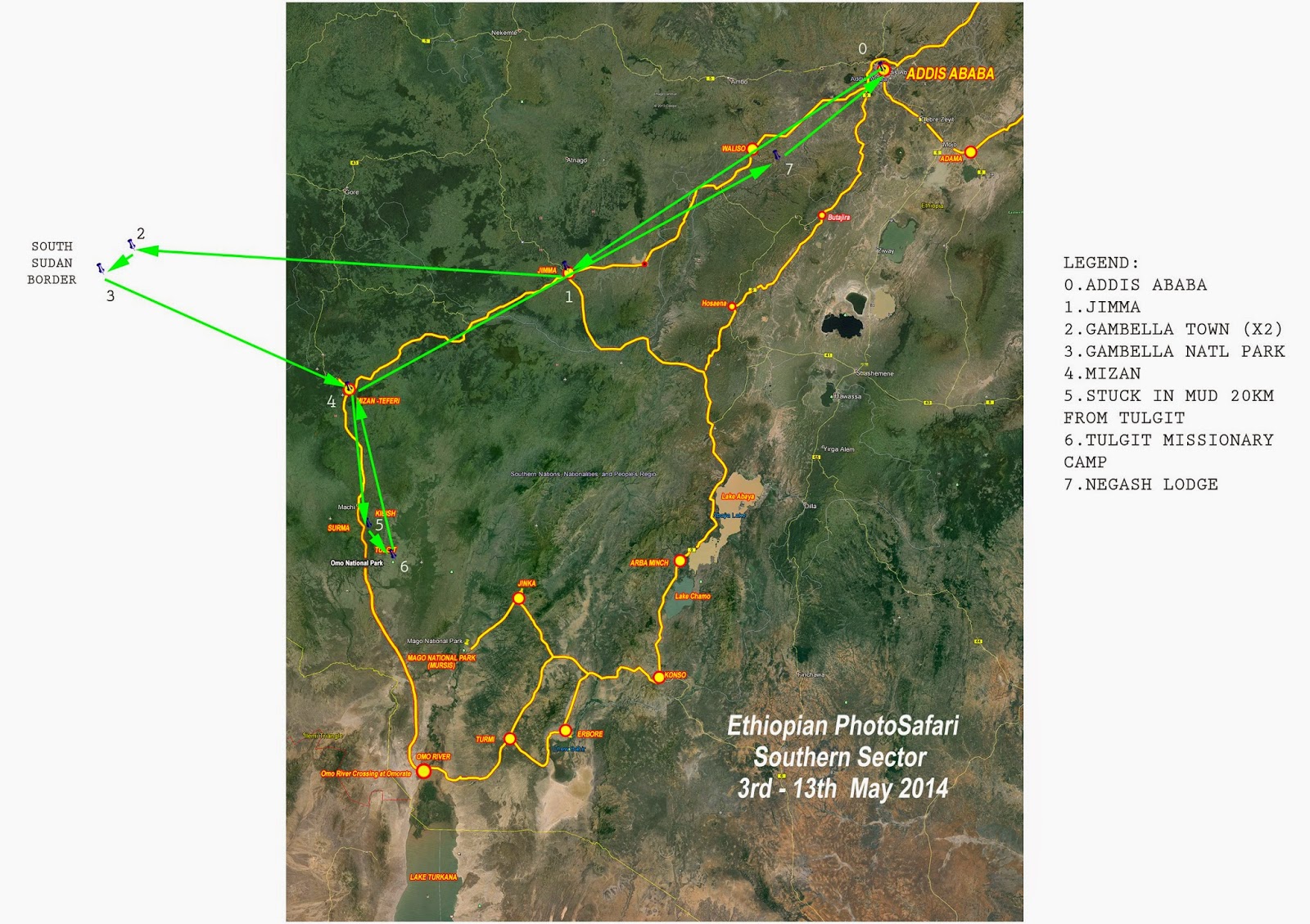 This is a massive departure from the original itinerary, made possible because the group was too small to put up resistance.

On the second leg of the journey, there were only 4 of us (including the organizer) participating. To be fair, we were prevented from moving further south into the Omo Valley by unexpected rains, but we also had fewer days to play with due to the Gambella diversion. Now you may ask, what is so special about Gambella that we had to detour 600km to see it? Apparently, top attractions are a tribe noted for their above average height and a national park with lions. The plan was to stay one night in Gambella town and the following one camping in the national park.

When we arrived at Gambella, 1 hour from the border to South Sudan (where a civil war is ongoing), the power had just been restored but water was out. My room looked like a jail cell, and I observed that there were double locks not only on the front door, but on the bathroom and balcony doors as well. I bathed from a pail of cold water (which, by the way, you have to bribe the hotel staff to haul up if you want it). The rooms were very stuffy, as the ceiling fan was barely moving. I had to make an executive decision about whether to leave the balcony open to the breeze, mosquitoes and potential intruders, or prudently close it and roast. I chose the former - good thing too, because electricity was intermittent throughout the night.

Breakfast the next day was prepared by our trip cook, as sanitary conditions in the restaurants were not up to scratch. We had to eat a lot faster than the armada of flies that descended on the food. After breakfast, we went to visit the cattle camps of the 'tall' tribe. Unfortunately, we only saw one or two really tall guys, as only adolescent boys, women and children seemed to be living here. If anything, the distinguishing feature of the camps seemed to be the acute grubbiness of the children, dirtier than even the Surma that we encountered later. 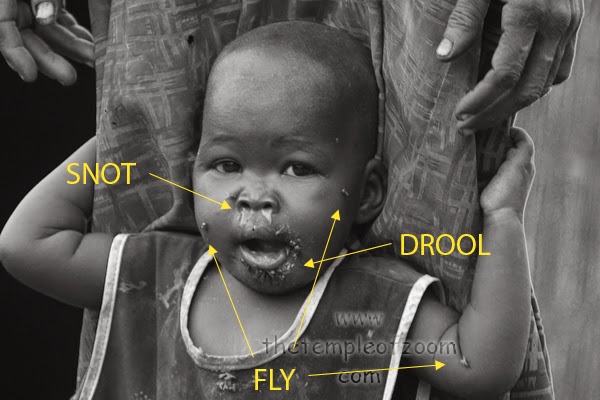 I saw many things in Ethiopia that defied its international stereotype of abject poverty and backwardness; however, the pictures of the malnourished children clothed in rags and living in bare huts here merely buttressed it. Although I did participate in shooting UNHCR poster shots with the rest, I felt the real story was on the plains.

After lunch, we set off for a night camping in Gambella National Park. We stopped to pick up two guards who would be guarding us from... animals and rebels, is my best guess. I wasn't sure which was more dangerous - the border with Sudan a stone's throw from the park, or the lions and hyenas roaming the wilderness. The park was huge - half an hour in, no vehicles were seen for the next two hours, en route to our 'campsite' (pictured below).

Along the way, we had spied carcasses of rather large animals left to rot, and in the sky, you could occasionally glimpse some vultures circling, no doubt around some dead meat. So, stepping out of the 4WD to our 'campsite', I idly wondered how I would muster up the courage to go to the bathroom at night, or whether the guards would be able to shoot fast enough if we were attacked by a pack of hyenas (whose jaws are said to be able to kill a dog in a single bite, without breaking skin).

I suppose anyone with any common sense was thinking along the same lines, as all 3 of us told the organizer and our local guide, in no uncertain terms, that we did not want to stay the night. A campsite (in our tourist-oriented minds) was *supposed* to include, at minimum, a perimeter fence and some extras like an outhouse, tent stakes, hut etc. Our guide was furious at the change of plans (and probably the increase in cost to him), but in the end we drove back another painful 3+ hours to stay at Gambella town again for the night.

The next day, there was no petrol at the stations and the drivers had to beg 30L each off the local army chief. At the Gambella province exit checkpoint, one of our cars was all but strip-searched as the border guards went over it tooth and nail. To say the security situation was 'tense' and 'tight' would have been an understatement.

In my opinion, there was no sane reason to come here unless one had to.

Continued in Pt 2 -> The Last Tirade