52 degrees C in the shade

Fresh from the disastrous hike up Mt Erta'ale (see 'Hike to Mount Doom', which also includes a little background on the Danakil and why we came here), we proceeded to see the salt flats for which the region is famous. Minerals in the ground have contributed to the multi-coloured hues of the rock, which form bizarre and shapes and contribute to the surreal nature of the landscape.

Again, there was no briefing about the location ie the distance to walk, what to wear and what to expect. Tired of being cooped up in stuffy trek shoes, I stripped down to Tevas. R of course was wearing those outstanding Swarovski flip flops that had seen her down the volcano safely. 50m into a path paved with sharp, uneven, salt-crusted slabs, it was evident that shoes would have been a much better choice of footwear. Imagine my horror (and R's especially), when we found out we were walking over a dried-up bed of sulfuric acid! I suppose the faint, tell-tale waft of rotten egg was a dead giveaway, but lack of sleep and the notion that the worst was over lulled me to complacency. It turns out the acid breaches the surface periodically and forms the 'lakes' we were going to see. Not a spot to venture anywhere near in open toed sandals!
Nevertheless, in for the penny, in for the pound. I took some postcard shots of the deceptively placid lake and got the hell out of there. 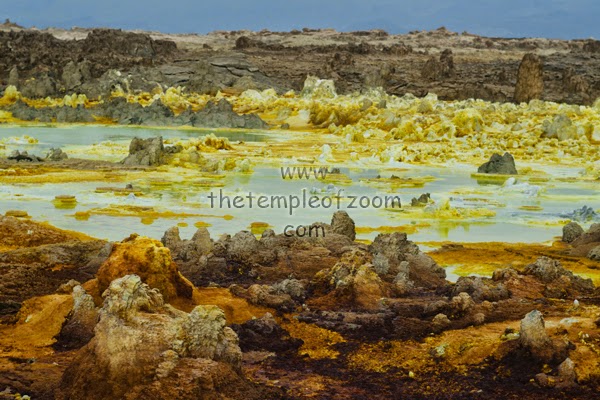 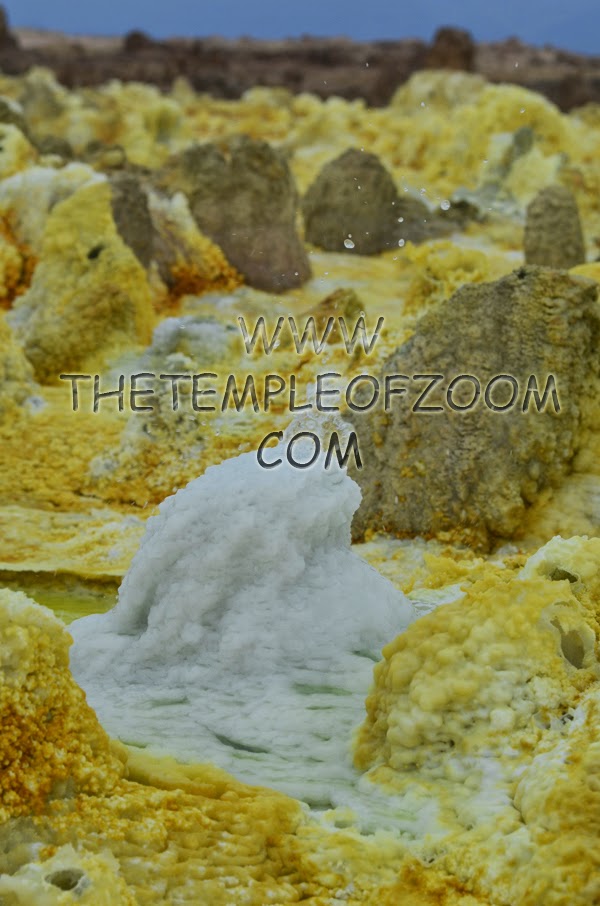 By now, the heat was starting to make its heavy-handed presence felt. No wonder this place was christened by National Geographic as “the cruelest place on Earth.” I had wised up after the water emergency the night before and sipped from my rations at every opportunity. In this part of the desert, there are no roads per se, just dirt track and the keen eyes of our hired Afar guide.

We stopped at a spot where some Afar people were plying their ancestral trade of mining and transporting salt. They were nice enough to allow us to try shaping salt bricks using a chisel customized for the job - for free. Later I found out they work all day, even at high noon, when temperatures go to 60°C+ in the hot(ter) season (there is only hot and hotter in the Danakil, imo). They guard their monopoly on the salt trade jealously, and like their habitat are known to be an unforgiving people. I was grateful to have observed the Afar ekeing out a living in this barren wasteland, without getting my head bashed in (by chisels, or those large salt blocks we were mucking around with). 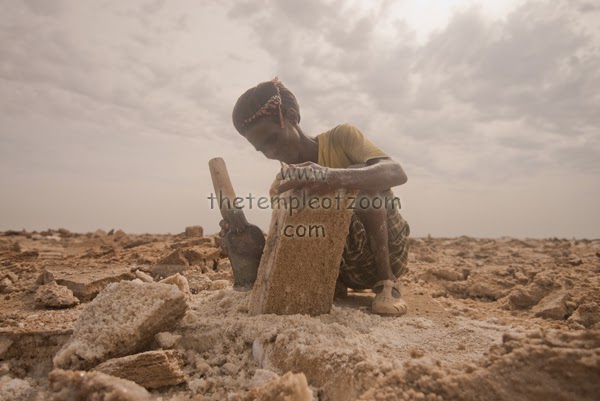 So now to Dalol, where we were to spend the night. We had been told it was a military garrison, so I was looking forward to a dormitory, a raised bed and most of all, a strong shower. However, the journey started splendidly with one car blowing a flat. The drivers swapped tires in 40°C+ conditions. Another vehicle had no air-conditioning. Ours was off and on due to the extreme heat outside. Frankly I was amazed it was working at all considering how much pain the radiators were taking. Still, it was like sitting in a very bumpy oven - the windows could not be turned down due to the dust backwash from the jeep's wheels sliding down our windows like falling rain.
En route, we stopped for lunch in an oasis. Trees grew thickly in a copse, but unfortunately the leaves were not broad / plentiful enough to provide much shade. A few people doused their heads with water to cool off. Our cook served fruit cocktail as an appetizer. This is the first time I have had it in what seemed like microwave form. The metal utensils were almost too hot to hold. Water was very warm, but I forced myself to down some - I had polished off 3L so far. Most of us could not eat the pasta main as heat had robbed us of our appetite. I tried to pee (it had been 7 hours) but what little came out evaporated swiftly. It was 52°C.
Arriving at Dalol, I wondered whether there had been some terrible mistake. There were no concrete buildings...only thatched huts with a few straw-woven cots outside. There was no strong shower; indeed, no shower, period. If water was to flow over body it would have to be done manually, in a makeshift bathroom about 50m from our camp. One brave person trekked over to use the toilet and came back to report that it stank to high heaven. Just as well that it was too hot to bathe / pee anyway. 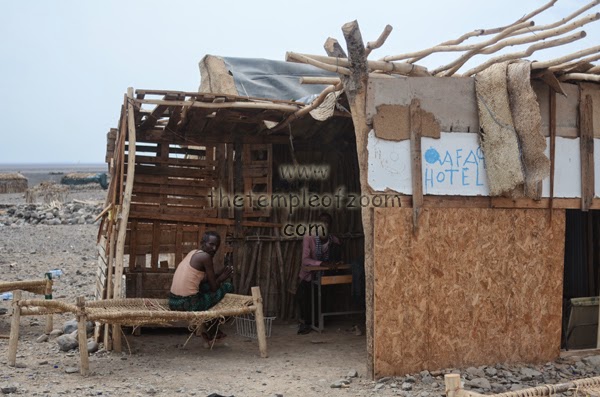 We deposited our soldier friends nearby (they had dormitories) and went in search of a cold drink. The one generator powering the one ancient fridge was not working, so I drowned my sorrows in a very warm Fanta. Sweat trickled down the sides of my face as I drank, and observed, walking nonchalantly outside like it was springtime in Paris, two young people from yesterday's gap year group. In tank tops and hatless, they were chatting, not about the heat (which is all our group could think or talk about) but how they were planning to spend the rest of their year off. Ah, the fortitude of youth!

We heard about a road construction camp a few kilometres away that had a fridge. With beer and soft drinks! The prospect of drinking something, anything, that was closer to freezing than boiling got us going. Besides, no one was in the mood to shoot, as evidenced by the lack of enthusiasm upon allowing not one, but two or three camel caravans carrying salt to pass by unrecorded.

When we arrived at the camp, I could hardly bring myself to walk the 70m from the entrance to the canteen. However, not only was the beer nice and cold, but the fridge was an industrial sized one and seemed to have an endless supply of cold booty. 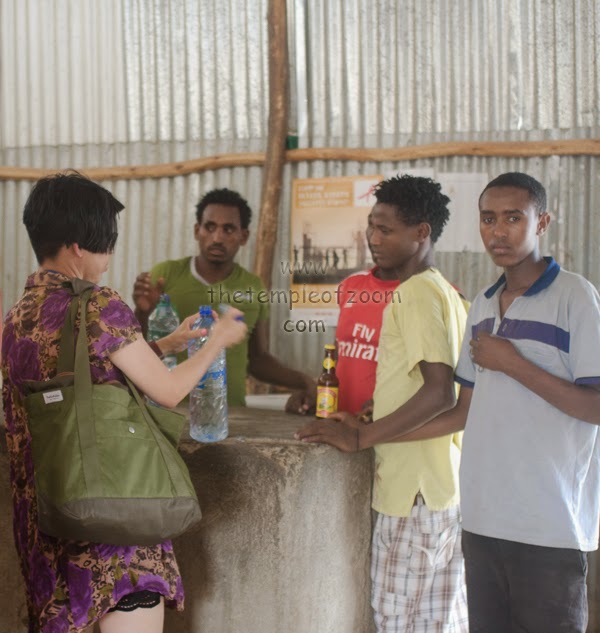 We saw crates and crates of beer stacked by the walls; it is free, understandably, for workers bold (or desperate?!) enough to take on a job here. They work all year round building roads in this harsh and unforgiving place, and earn around 400birr (~US$20) per day. I was told the Chinese had also built another road through the desert. Indeed, they built many of the modern asphalt roads throughout Ethiopia, which are a pleasure to zip around on once you have experienced clawing and crawling your way down the old dirt tracks preceding.

Our arrival was quite the social event. The camp boss showed up to greet us. He spoke good English, and was kind enough to offer us a shower. We jumped at the proposal - not having towels, soap or a change of clothes was a trivial matter in comparison to the prospect of sloughing off the grime and sweat of the past 36 hours. We purchased some soap at the canteen and he led us to the shower stalls, which were corrugated sheets of iron forming 2 rows of cubicles. Water was piped down from a giant tank squatting on a rise just adjacent to the showers. The water was heaven; if it was  slightly brown I did not really notice or care. I did not have a towel or change of clothes so was forced to put back on the funky prevailing ones whilst still dripping. To my suprise, my clothes (and skin) were dry in literally five minutes - that is the Danakil Desert for you!

On the walk back, we noticed that the workers' quarters had air-conditioning. They sleep four to a room. N wanted to rent a space in the camp boss' room (I think he was seriously prepared to pay upwards of US$100 a night for the privilege), but all spaces were taken. We were told it gets so hot that workers have to have air-conditioning, otherwise they do not have enough sleep to function properly on the job.
On that desultory note, we headed back to Dalol. Only half the group attempted dinner. S had her soup lying sideways on a cot. We all opted to sleep out in the open again... this time though, it was much, much hotter than Erta'ale (which was elevated and thus cooler). I could not sleep at 8-9pm and still not by midnight. The wind was strong, but all it blew out was hot air (try to imagine standing outside a large oven that is constantly being opened). I reckon the temperature was in the high 30s/low 40s (°C) at the time. 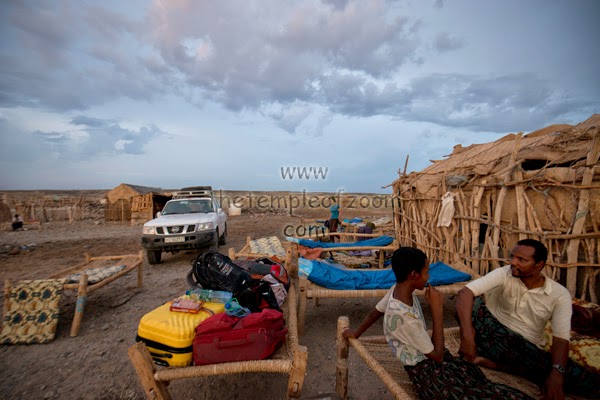 I fell asleep at around 3am when the temperature finally descended below 35°C. Too soon, dawn arrived and we had to get up, and thankfully, out. 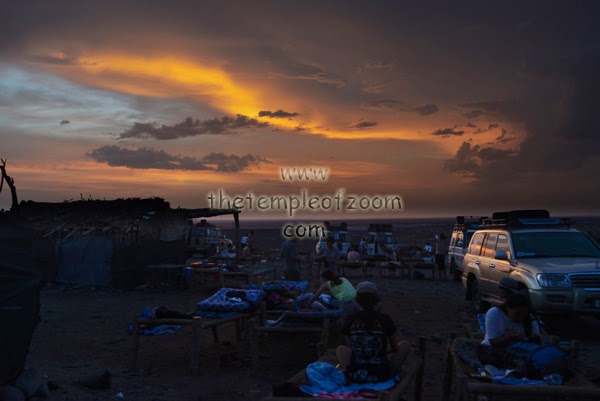